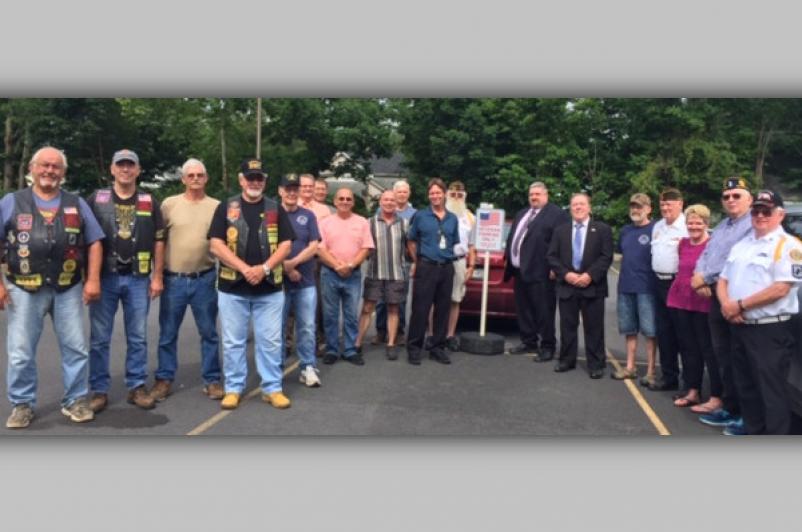 Rolland “Boomer” Bojo, Jr. was recently named the new President/CEO of UHS Delaware Valley Hospital. One of the very first things Boomer did was create two parking spaces for veterans. This was a great way to recognize their service to our country and the sacrifices made to keep us free.

On Friday, July 16 approximately 20 veterans from the Veterans of Foreign Wars (VFW), the American Legion, the Walton Vets Club and The Southern Tier Chapter of the Nam Knights came out to meet Boomer and see the sign. Explaining his reasoning for creating the spaces, Boomer said, “We live in the greatest country in the world, and that is because of people like you. We appreciate everything you have done and the least we could do to show you some recognition was to create these specially designated parking spaces.” Walton Mayor Ed Snow, a Vietnam veteran, spoke about how those veterans received no respect at the time of their service and were even being called baby killers. He spoke of “how great it is to have this turnaround and this respect being shown here in Walton.” Joe Cetta, Walton Town Supervisor and a Marine veteran, welcomed Boomer to Walton and explained how people considering a move to the area ask about available healthcare and he is proud “to tell them of the gem Delaware Valley Hospital is to the community.”

Boomer concluded by saying he plans to do great things and grow DVH, bringing services like the new nuclear medicine service to the facility. He assured everyone his door is always open and if they should reach out if they have a need.