As part of the ongoing efforts to vaccinate the community of the Southern Tier, UHS was proud to assist with a "Pop Up POD" (Point of Distribution) at the American Civic Association in Binghamton on Friday, February 26.   The issue of equity in providing vaccinations is foremost among the considerations set forth by the state of New York, and that was the objective of placing this vaccination site at the American Civic Association.

Mayra Garcia, Executive Director of the ACA is an advocate for immigrants, undocumented residents and others who may be from underserved communities.   Mayra and her team began collecting information on individuals wanting the vaccine weeks ago, and upon notification of this clinic, her staff reached out to those individuals as well as others in the community and successfully vaccinated 258 people at the event.  Mayra, along with Lori Welch from the United Way,  co-chair the Health Equity Task Force for the Southern Tier Regional Vaccination Hub, and both are working with representatives across the eight county region to reach at risk populations that vary by community.

This event was truly a community collaboration between the American Civic Association, UHS, Lourdes, the United Way, the Office for Aging, Broome County and the City of Binghamton.  The effort at the American Civic Association was an example of all of these organizations meeting the needs of these populations "where they are" to make getting vaccine as easy and efficient as possible.

John Carrigg, CEO of UHS said "We were delighted with the success of this event.  This is the sixth event of this type in the Southern Tier region.  We have had three pop up PODS in Broome county,  two in Chemung county and one in Tompkins county.   As the vaccine supply becomes more readily available, we hope to see more of these very targeted clinics to help us broaden our reach to others in the Southern Tier, such as farmers, rural residents and people who are homebound." 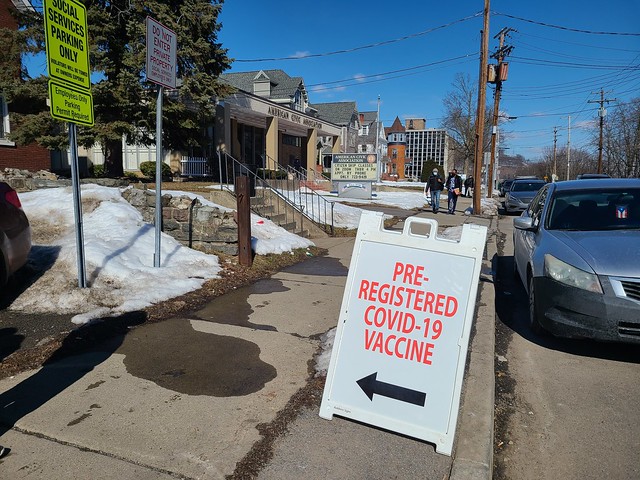