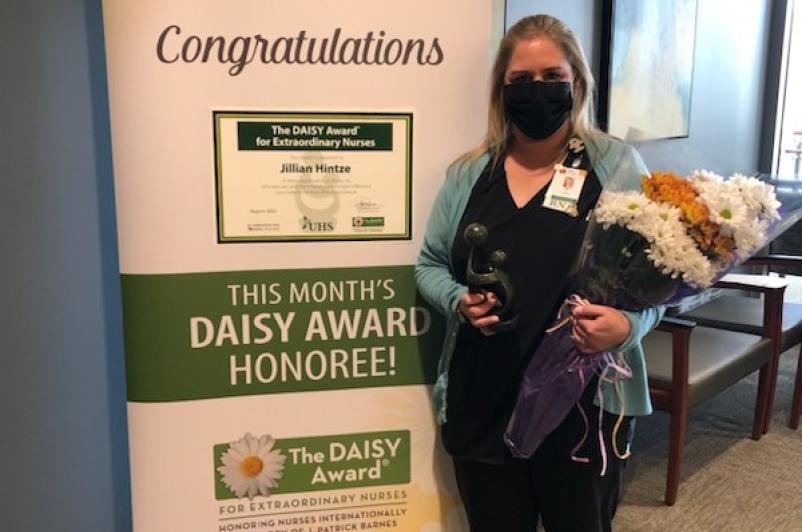 A program to recognize the care and compassion of extraordinary nurses continues at UHS with Jillian Hintze, RN, UHS Podiatry, being named the August winner of the DAISY Award! Jillian was recognized and presented with the award for the achievement, and enjoyed cinnamon rolls, a symbolic treat in honor of Patrick Barnes, whose experience inspired the award.

The UHS Podiatry nurse was nominated by a colleague, Susan Keehle. In her nomination letter, Susan spoke about Jillian's positive attitude and ability to adapt quickly. After joining the UHS Podiatry team in April of 2022, Jillian shortly learned that the current RN and other clinical staff would be transitioning out of the office. Staying positive, she took every opportunity to learn as much as she could in the short time she would have with the seasoned podiatry staff. Susan mentions how Jillian began taking on the clinical lead role while setting short, and long-term goals for her and the team. During all the changes, Jillian did not waver at keeping the patient at the center of her day, or to stop what she was doing to help a colleague in need. She has gone above and beyond and stayed many long evenings to ensure that each patient message or concern was attended to in a timely fashion.

"Jillian is an exceptional leader with compassion that shows each day. In the time Jillian has been with Podiatry she has led and co-led many projects in our office." Susan said, "Jillian continues to seek what can be best for her co-workers, and patient flow, while working very closely with her supervisor. I am thankful to have Jillian on my team and look forward to seeing her continue to grow at UHS."

The DAISY (Diseases Attacking the Immune SYstem) Award is an international recognition program that honors and celebrates the skillful, compassionate care nurses provide every day. The DAISY Foundation was established by the family of J. Patrick Barnes after the Seattle man died from complications of the auto-immune disease ITP in 1999. During his hospitalization, the family members deeply appreciated the care and compassion shown to Patrick and his loved ones. When he died, they felt compelled to say thank you to nurses in a very public way. To learn more, visit DAISYFoundation.org.

Started at UHS in April 2021, nurses are nominated by anyone in the organization - patients, family members, other nurses, physicians, other clinicians and staff - anyone who experiences or observes extraordinary care being provided by a nurse.

Nominations are submitted by using a form found on NYUHS.org. On this form, the person will be able to tell the story of why they are nominating the nurse, while also choosing which UHS Value (Compassion, Trust, Respect, Teamwork, Innovation) the nurse displayed. 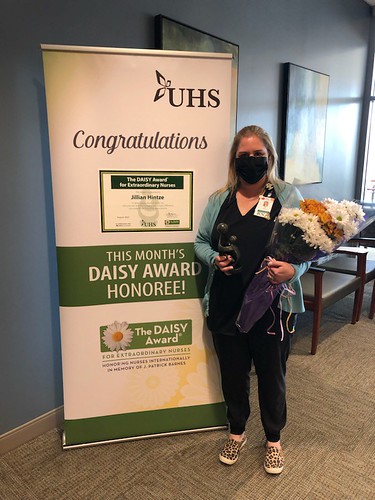