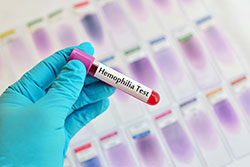 Blood disorders, such as hemophilia and von Willebrand Disease, affect men, women and children of all ages. Approximately 20,000 Americans are living with hemophilia; two million others may have von Willebrand Disease (vWD). No cure for either condition has yet been discovered. But, thanks to the latest medical advances and specialized comprehensive treatment, anyone with a blood disorder can lead an independent, productive and active life.

Comprehensive care means total care. At our Johnson City, NY, Blood Disorder Center, we treat the whole person, and his or her family, through continuous supervision of all medical, psychological, and social aspects of blood disorders. The Center is recognized as a federally-funded Regional Comprehensive Hemophilia Center and is affiliated with the National Hemophilia Foundation and other regional hemophilia centers. The growth of comprehensive care centers like ours throughout the United States has greatly improved the quality of life for thousands of people with blood disorders.

UHS’ Blood Disorder Center is located at UHS Wilson Medical Center in Johnson City, N.Y. The Center’s hospital location provides a critical advantage to patients with bleeding disorders: continuity of care in case of an emergency bleeding episode. Skilled medical staff familiar with the patient’s case are on hand day and night to swing into action. Patients have direct access, when necessary, to an acute care hospital with both pediatric and adult beds. Emergency infusions are always available.

Hemophilia, a genetic blood clotting disorder that results in prolonged bleeding, almost always affects males. The disease is hereditary, passed from parent to child. In one-third of all cases, where there is no family history of the disease, hemophilia seems to be caused by a spontaneous gene mutation. Hemophilia affects persons of all races, nationalities and economic backgrounds.

A person with hemophilia has either an inactive or an inadequate supply of one of several factors needed for blood to clot normally. Persons with hemophilia do not bleed faster than other people; instead, their blood forms clots more slowly. Minor cuts are easily treated, but bleeding is often internal, into joints and tissues. Without proper treatment of the swelling caused by this internal bleeding, permanent disabling damage may ensue. Bleeding can begin for no apparent reason or be the result of a bump, a bruise, or an injury.

Hemophilia can be mild, moderate, or severe. The major types of hemophilia are hemophilia A and the less common hemophilia B, also called Christmas disease. Many mild cases are not diagnosed until after the occurrence of an injury or major surgery.

Clotting factor replaces the missing protein needed to form a blood clot. Although an infusion will stop bleeding, clotting factor remains effective for less than a day. Many people with hemophilia use self-infusion on a regular basis to prevent serious bleeding in advance.

Von Willebrand Disease (vWD) is the most common inherited bleeding disorder found in humans. Some patients diagnosed with vWD lack an adequate level of a specific blood protein required for blood clotting—the von Willebrand factor (vWF); other vWD patients have a clotting factor that works improperly. vWD is usually a mild disorder and often goes undiagnosed. In more severe cases, vWD can resemble hemophilia, but it is rare for persons with vWD to bleed into joints or muscles. Typical vWD symptoms include recurrent nosebleeds, easy bruising, heavy menstrual flow, or excessive, unusual bleeding from the mouth or gums. People with vWD can bleed heavily for a long time after surgery or injury.

One of two children born to a parent carrying the vWD gene is likely to have the disease. Unlike hemophilia, however, vWD equally affects sons and daughters of the carrier.

VWD is divided into "types" according to whether a person has a decreased level of vWF in his or her blood, has a type of the blood clotting factor that does not work, or both. Treatments vary by each type. For minor bleeding, such as nosebleeds, treatment may not be necessary. When treatment is needed, medications are now available that may be applied to the bleeding site. Oral medications have also been developed to help keep a blood clot in place long enough to "plug" the bleeding site. More serious bleeding problems may require infusions. 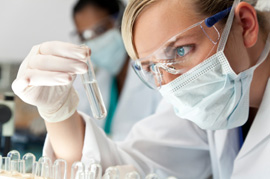 UHS offers all the services of a modern clinical laboratory, combined with comprehensive clinical and anatomical pathology services. Our laboratories feature state-of-the-art analytical equipment and skilled licensed personnel, including board certified pathologists. Get more information on our laboratory services here.

When you come to the Anticoagulation Clinic, the pharmacist will meet you to discuss any questions you may have about your anticoagulation therapy and provide the necessary testing to evaluate your progress.  All information is confidential and is kept in your medical record. Information obtained during your visit, including your test results and any dosage changes will be available for your primary care provider or specialist to see.  If you have questions concerning your appointment or regarding clinic hours, please call the Anticoagulation Clinic at (607) 763-6494.

Clinic visits are by appointment only. Patients are referred to the clinic by their primary care provider or specialist. If you are interested in utilizing our services, or are in need of a referral, please contact the provider who is currently managing your anticoagulation medications. Once the order is received at the Anticoagulation Clinic, you will be contacted by the clinic to set up your initial visit.

Medicare, Medicaid, and private insurance will cover some or all of the services at the clinic. Please check with your insurance provider for details. UHS will bill your insurance company, and you will be responsible for any co-pay or additional charges not covered by your insurance carrier.

Your care will be provided by a pharmacist with special qualifications who has specific knowledge, training and education in anticoagulation therapy.